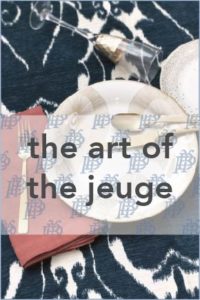 we’re not judging you; we’re jeuge-ing you.

I have absolutely been that friend. The one that comes into your home, and starts ever-so-slightly rearranging the things on your coffee table. In my defense, this was typically because I had been asked to do so. But the most honest of my nearest and dearest will tell you that I’ve ended up reorganizing a bookshelf or two, without the invitation. This instinct of mine has nothing being a neat freak. I am nowhere near the kind of person who is perturbed when one slim volume on that shelf is out of place. No, it isn’t about judgment at all. It’s about “jeuge-ment”. 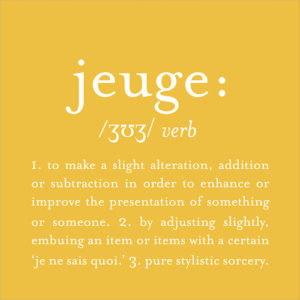 What-ment you say? Jeuge-ment. As in ‘to jeuge’, to tweak, or to spiff something up, by way of rearranging, adding, or subtracting. Tory Burch calls it “fashion speak for smartening up a look.” That long sleeve button down is fine, but turn up those cuffs and layer in a necklace… dahling! It’s fabulous.

It’s the same idea really, outside the fashion world. As it comes to setting a table, or the scene for a party (or your bookshelf, without asking), I like to think of ‘jeuge’ and ‘jeuging’ as the invisible act of transforming the distinct objects into a presentation, as a whole.

For example, for a YBP-designed table, everything is placed in layers from the base up. Linens, runners or placemats, then plates, napkins, silverware, glassware, and–last but never least–accents such as candles and floral. We could set each element down with perfect alignment. Set every taper perfectly straight in its sterling candlestick. Everything is technically set. But we are not done setting the table.

Enter, the art of the jeuge. It’s more instinct than science, really. As I approach it, you take the entire thing in. If it’s a table, I look at spacing. Flow. Is that one floral arrangement to tall to sit between two guests? Will that candlestick get in the way of someone reaching to pour wine? Does that cluster of bud vases make sense as a group? And so on…. Watch a YBP install and you’ll see all of us nudging certain things this way and that. Swapping one accent piece out for another, or nixing something altogether.

Sometimes this is a long process. Sometimes all is takes is scooting a single piece, and it all comes together. You can feel it when it does. And it’s that moment, where placement looks purposeful, but not too practiced, that is the magic of the jeuge.

So, the next time I am a guest in your home and you catch me stacking magazines with one just slightly askew, please know I am not judging you, I’m jeuging you.