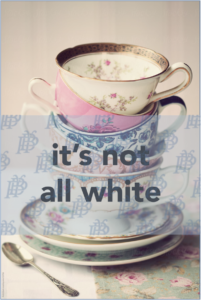 it’s not all white: grandma’s china is back and i love it (finally)

I’m a millennial. Technically at least, depending on how you’re slicing generations. I’m on the older side of the millennial bracket though: I remember the eighties and my Laura Ashley wallpaper, and participated in its revival in college with leg warmers and brightly colored tights. I dabbled in angsty grunge, with a side of Rachel Ashwell’s Shabby Chic, as a teen in the 90s. In my twenties, grunge’s second-wave iteration, hipster grit permeated my wardrobe, while Dorothy Draper’s glam Hollywood regency look dominated my home decor. Somehow this panoply of stylistic references and forays landed my early adult style squarely in the modern, minimal, industrial camp. I know I am not unique, in my generation, to this affinity.

I will admit, like many, many generations before mine, my affection for the stark simplicity of modernism was absolutely a reaction. A rejection even, of certain styles imprinted in my memory as “out-dated”. So, returning home to my mother’s house for holidays and family events, I would almost wince as the china came out. Hand painted Quimper, featuring French pastoral scenes from the 1700s. Ornate and gilded, tiger-themed dishes by Lynn Chase. “Too much” I thought, “too fancy.” My own selection of ‘china’ upon getting married was not china at all, it was actually stoneware: Heath Ceramics, coupe shapes only, in a decided neutral palette.

What I noticed though, traditional elements would creep into my brain. I was drawn to them in unexpected ways. My three favorite hotels, the Saint Cecilia in Austin, The Madonna Inn in California, and Hotel Havana in San Antonio all have thoroughly throw-back vibes. Full of Fostoria glassware, antique and vintage furniture; curated retro eclecticism, writ large. But those were interiors. Fine china cravings came later.

My life in retail led to me to work in an upscale home-goods store in Houston. While initially I gravitated towards the earthy, glazed stoneware from Juliska (having lost my Heath Ceramics in my divorce), I found myself lingering in the fine china room, experimenting with mixing and matching of plates I would have called “too fancy” not long ago. Every other day I would make an excuse to pass the Herend display cabinet, running fingers along frilled and gilded edges, envisioning which mix of their colorful florals I would use the most.

It was both fitting and timely that the opportunity to work for Your Butler’s Pantry came then. I couldn’t hide the sparkle in my eyes seeing Reynaud, Royal Limoges, Burleigh and more. Envisioning the mixes that could happen with the vintage Fostoria glasses, brushed metal flatware, colorful linen napkins. Little waves of excited nostalgia began to set in. Now, months later, I’m fully on board with the revival of such fine things. And I’m not the only one.

The Washington Post recently published an article on the “comeback” of vintage and fine china. Individuals, hotels and restaurants alike are incorporating these items, once “grandma territory” into everyday life, and into the presentation of food. Even cocktails! Those kinds of patterns, mixed artfully, imbues a table, and the scene, with warm eccentricity. The antidote to the sometimes harsh reality of modern life. To me it is certainly an embrace, and reinterpretation, of what most of my peers so heartily rejected over the last decade or more: heritage, craft, and color.

Even as I write these words and I can feel my grandmother grinning. And I can hear my mother saying something along the lines of “I told you so.” I was warned by both of them that someday I too would have the “china jones”: the coveting and collecting of fine dishware. The jones is genetic, and explains the decades-long stand-off between two family members over a set of Spode plates.

While I do not foresee me ever arm-wrestling a sibling over hand-painted bone china, I certainly predict that my own china cabinet will soon have something other than white stoneware in the mix. (I have been lusting after a particular pattern recently.) I predict also, that you’ll be looking forward to how Your Butler’s Pantry can set your table with modern nostalgia, fine china made fun, just perfect for your next party.